I’ve been speaking to large audiences ever since I became president of my university’s Mountaineering Club in 1977.

Please write to me at john [at] johnharlin [dot] com to discuss booking a show.

A custom presentation for your organization is certainly possible, but I’m currently promoting two talks in particular: 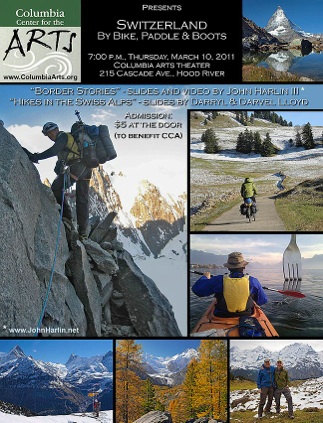 Border Stories: Around Switzerland by boot, boat, and bike

In June 2010, I set out on a three-month journey to follow the entire Swiss border under my own power, a 1,200-mile odyssey along the ragged spine of the Alps. Eleven days in, I fell 50 feet, breaking both of my feet and needing a helicopter rescue.

Three months later, my bones mostly healed, I returned to the Swiss border. I descended the Rhine River by kayak, traversed the Jura Mountains by bike, and paddled Lake Geneva back to my starting point. This completed the relatively flat northern borders.

The following summer I returned to the high Alps, this time traveling clockwise from eastern Switzerland until I completed my journey near the site of the previous year’s accident. Crossing these southern borders pushed me up and down over 700,000 vertical feet–roughly the equivalent of climbing Everest from the sea and returning to salt water a dozen times in a row. There were plenty of close calls and hard days, but what stands out to me and my audiences is the surprising complexity of the border country, where history and beauty far outweigh one man’s adventures.

Eiger Obsession: Facing the Mountain That Killed my Father 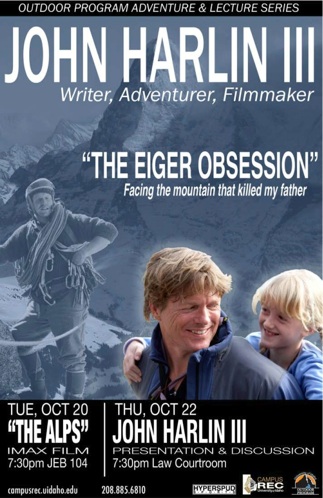 In The Eiger Obsession I wrote, “When I was a kid it always bothered me that Dad hadn’t been able to survive most of his 4,000-foot fall. He would have wanted to savor the event: his ‘ultimate experience,’ the one he had been looking forward to, even though he wanted it to come later.”

Forty years after, at the age of 49, I finally climbed Switzerland’s most notorious peak, the Eiger—the mountain that killed my father—while my own nine-year-old daughter watched through a telescope and an Imax-theater movie crew filmed. The final drama is captured in The Alps, in giant-screen theaters worldwide. But the full story spans the years between my childhood in the Swiss Alps and the eventual ascent that felt like it lifted me out of Dad’s legendary “hardman” shadow. These were years of approach and avoidance, fear and resolve, family and responsibility.

The Eiger Obsession has inspired audiences in six countries, sometimes to standing ovations. One woman commented afterward, “That’s not a climbing story, it’s a love story.” But it’s a love story that uses exciting adventure photos and film clips that span mountain ranges, continents, and generations. When I finally challenge the mountain that frightened me above all others, you’ll see that you, too, can slay your demons, and fulfill your dreams with the support of the people you love. 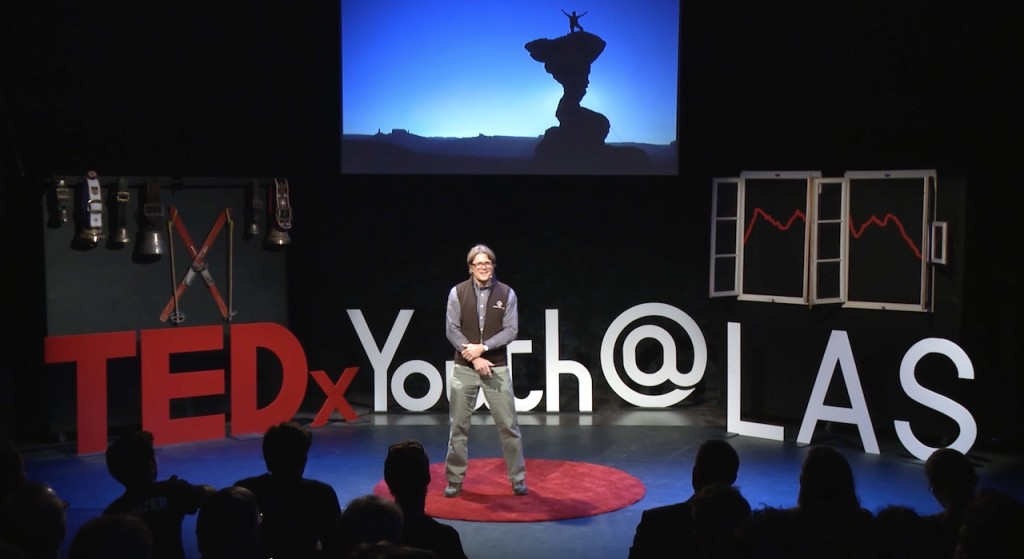